The Ayurvedic use of the word marman (acupoint) is synonymous with the word varman in South India. Dravidia refers to the regions of South India and includes the spoken languages of Tamil, Kannada, Malayalam, Telugu, and Tulu. There are three subgroups within the Dravidian linguistic family: North Dravidian, Central Dravidian, and South Dravidian, matching for the most part the corresponding regions in the Indian subcontinent.

Dravidian medicine includes much of Ayurvedic theory, but also recognises distinct varman therapeutics. Dravidian practitioners have identified two main groups of varman, supported by classical Dravidian texts on Siddha medicine and varman techniques. This grouping of varman is not found in Ayurvedic theory, although both systems philosophically agree upon a common source of varman.

The two groups of Dravidian varman are:

According to Dravidian theory, these two groups are believed to incorporate the entire nervous system of the human body. “Padu and thodu varman allows the intangible signs of life (such as the mind, desires and intellect) to manifest within the life-centres of the body, and to express action in the world” (Nair, interview, 17/9/98).

The Dravidian Siddha theory concerning the 12 padu varman and their relationship to the 96 thodu varman demonstrates an important addition to the theories commonly held by Ayurvedic practitioners. This information is significant to Ayurvedic theory when attempting to understand the relationship between groups of marman and their theoretical role in maintaining balance in the human body. The importance of Dravidian varman theories is further highlighted by the opinion of scholars who hold that the Dravidian text Odivu Murivu Sara Suthram by the sage Agastya is likely to predate the records of the Ayurvedic author Susruta. 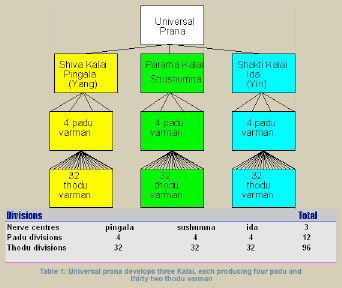 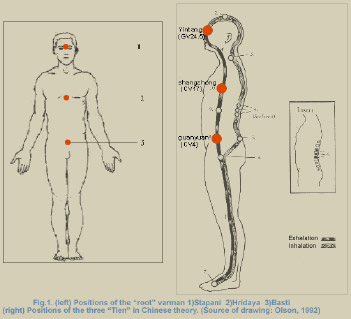 Chinese acupuncture similarities to Ayurvedic and Dravidian theories of varman

The Chinese believe that the three channels of Chong mai, Ren mai and Du mai originate from an ancestral (prenatal) source and are interrelated:

This is why we can say the Du mai, Ren mai and Chong mai have different names but are all the same (Wang Bing; quoted from the Nei Jing Jie Po Sheng Li Xue; Matsumoto and Birch, 1986, p 17).

Similarly, the Dravidian view of the 12 padu varman is that they are manifested from the three energies (kalai) (see Table 1), which are believed to have a single origin – universal prana. An apparent correlation between the two systems of Chinese and Indian theory regarding the origin of the channels is presented (see Table 2) and their location on the human body with a comparison to Chinese acupoints (see Table 3). 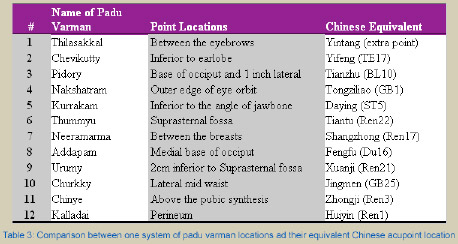 Practitioners from the state of Tamil Nadu and Kerala believe that the “life centres” (chakras) were the key to understanding the varman effect. These “life centres” are also recognised in Ayurveda but they are mainly used by those practitioners of yoga who develop the kundalini, the essential energy which is said to flow through the region of the spine in the human body. It is believed by Ayurvedic and Dravidian practitioners that the three major energy channels (kalai) which constitute the kundalini, commonly known as the Ida, Pingala and Sushumna, form the main nerve centres (chakras) in the body and are the intermediaries of marman effects. The Sushumna is said to flow up the spine and the Ida and Pingala alternate sides between the chakras, represented by the early Vedic symbol shown in Figure 2. 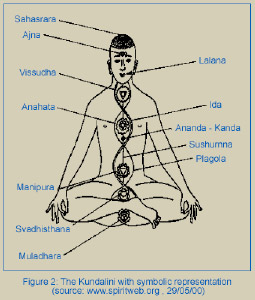 Dravidian practitioners often refer to the theory of a central energy source in the human body. In this theory, the seven major nerve centres (chakras), which act as a plexus for the three primary nerve channels of the kundalini, make possible the effects of the varman. The network of varman is believed to exist because of an indirect connection to the source of the kundalini and its associated chakras. This connection is brought about through a hierarchy of varman which can be summarised in two primary groups, the padu and thodu varman (Nair, interview, 19/9/98). Each of the 12 padu varman collects impulses from, and distributes to, eight thodu varman. In line with Ayurveda, a total of 108 varman may also be found in the Dravidian system, although Dravidian medicine observes many additional varman. 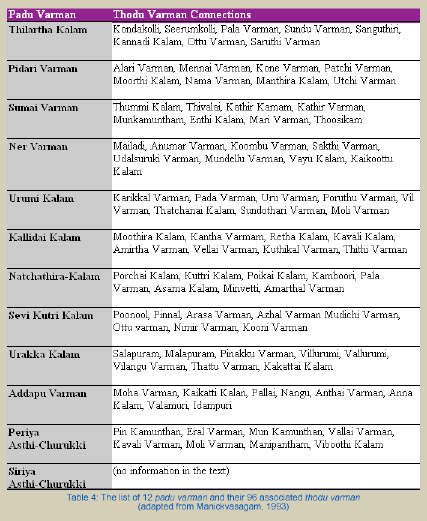 There is a need for further translation of writings concerned with the Dravidian tradition as many aspects of varman therapeutics are believed to be contained in these texts:

Unfortunately, no systematic attempt has been made so far, either by Tamil savants or by Siddha [Dravidian] medical practitioners, to render with critical evaluation even the major Tamil texts into English. The two main reasons being the enigmatic nature of the texts and the secretive attitude of Siddha practitioners. Nonetheless, an appreciable number of texts in Tamil have been printed, although many of them are still in manuscript form, preserved in libraries in Tamil Nadu. According to Velan, there are over 700 Siddha texts in Tamil, of which 180 have been printed (Subbarayappa, 1997).